I have a limited number of these bamboo shafts available for sale. I have two lengths, 85cm / 33 1/2" and 100cm / 39 1/4". These shafts are almost completely ready to go with the skin already removed, the nodes flattened, and only needing final straightening. They are not graded by spine like the arrows shafts we are accustomed to, they are sorted by weight. These shafts are a great deal at $3.00 each plus actual shipping.

April 13, 2010 update: these shafts got a great reception at the 2010 Chamberlin Ranch shoot and are all gone. I have more on order. When they arrive I'll make another blog post about them. 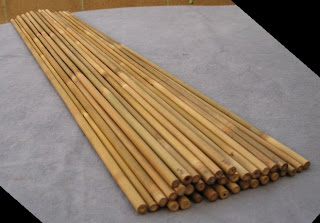 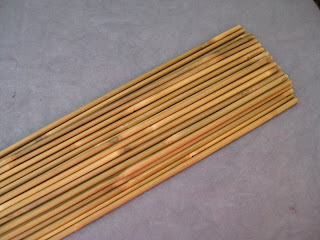 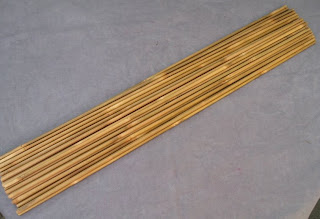 If you've never tried bamboo arrows you should consider them. Some people call them Nature's Carbon Arrow Shaft. They are tolerant of a wide range of bows and are very tough. If you want to keep things simple it's easy to mount plastic nocks and standard fieldpoints or broadheads to these shafts. With some more work a self-nock and a trade point would really be wonderful. Can you think of a better looking arrow to shoot from a self bow?
In between other projects I'm working on a set of these for myself. When I get them finished I'll post up pictures.

New Arrows Out the Door

I finally got a bunch of arrows finished and off to their new homes.
For your viewing pleasure, in no particular order, here they are:

Mario said he wanted something unique, it just had to have green and white somewhere in the design. If these aren't unique, I don't know what is. When I'm asked how I do this design my usual answer is, "a very small brush and about two hours per arrow." It's a little easier than that, but I'll keep my secret unless you email and ask, then I'll let you in on it. 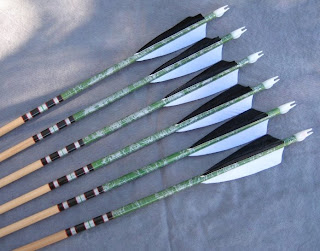 Steve isn't particularly worried about what his arrows look like. He knows what he wants in colors and he leaves the rest up to me. They usually turn out satisfactory.
Steve hasn't seen these arrows yet, he wasn't at the Pasadena gathering when I brought them.
He'd better show up for February, I had to turn down a couple offers to buy them. 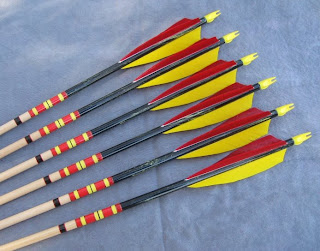 Garry is a little perturbed with his son. The dang kid took Garry's bow and a set of arrows I'd made for it and went and collected a couple nice California deer. Now he won't give either the bow or the arrows back to his dad. So Garry had to order this set for himself.
These arrows have horn reinforced self-nocks and the leading edge of the fletching is wrapped with thread. Garry's bow doesn't have a shelf so the arrow rests on his hand. With the thread wrapping the feather won't cut his hand. 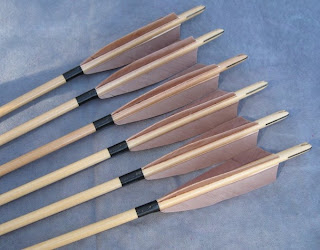 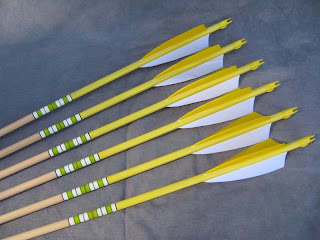 Gilbert also wanted a set of less bright arrows, so he got them, too. 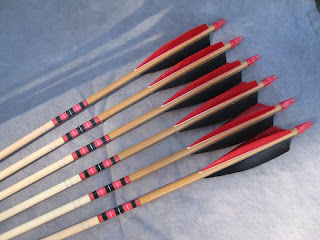 Greg has the right idea, he tells me what spine he wants and to go with banana fletch, then he says, "Use your imagination." He's been pretty happy so far.
It's difficult to see in this picture but there is red mixed into the black crown. In shade it's not very obvious but in the sunlight it really pops out for a special look. 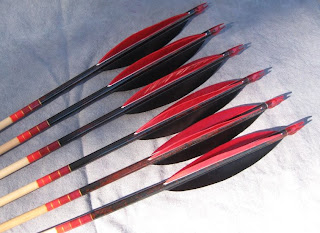 Sig wants bright arrows, too. Two sets of them. 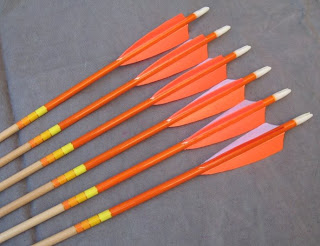 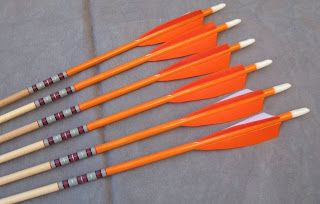 That's it for now. I've still got another two sets to wrap the thread on the fletching. I'll post pictures of those once I'm finished with them.
Now maybe I'll have time to do a new set of arrows for myself...
Posted by Guy Taylor at 11:08 PM No comments: