Hah! It’s been so long since my last blog post I’ll bet you thought I’d dropped off the edge of the earth! Far from it, although it may sometimes seem that way.
We have survived our move to the California high desert.

Anaheim, the home of Disneyland, had just gotten too costly to live in. Now we’ve found a little house on a dirt road in Lucerne Valley, CA. It’s a big adjustment, especially for Fayme. We don’t have a garbage disposal, dish washer, or clothes dryer. Not having those things is livable but we also don’t have a good internet connection or a garage, and those two things are more difficult to do without. We’ve had to go back to a dial-up internet connection and it’s just about worthless. I’m hoping that the local phone provider gets more ports for DSL in the area before too long… but to tell the truth, I’m not holding my breath.
The lack of a garage has been a little easier to rectify. We arranged to rent a couple containers and had them plopped on the back yard. Originally we tried to do with just one but we ended up having too much stuff. Now we have his and hers storage containers that will also double as workshops and studios.
It’s been an interesting adjustment to move out here. Lucerne Valley isn’t a very large town and while there is a post office, a pretty fair grocery store, a couple feed stores, two hardware stores, and a western gift shop, there isn’t a whole lot more. Luckily, the towns of Apple Valley and Victorville aren’t very far away and they have pretty much any store we’d need… except Trader Joe’s and Lee’s Sandwich… c’mon, guys!
One of the first questions I’ve been asked is if I have air conditioning in my new desert home. Actually, air conditioning gets too costly so most folks have evaporative coolers, aka swamp coolers. It’s been pretty mild since we got here so we haven’t had a chance to see how well ours works but I think it will make those hot desert days bearable. What’s actually been of more concern has been staying warm. For those folks not familiar with the desert, it can get bone chilling cold at night. We’ve been experiencing the same unexpected cold temperatures the rest of southern California has in the last few weeks and it’s been butt cold out here. We’ve even gotten a little bit of snow a couple times. Our heat is coming from a small wood burning stove in the living room. Through a gracious donation of free firewood from friends Ken and Barbara, and Jim and Carol, we have this little stove doing its duty. It works pretty well but it’s not a fancy model with blowers and heat exchangers so the heat doesn’t extend very far past the living room. The bedrooms and kitchen are still a bit chilly. That’s fine for me as I sleep well when the air is cold but poor Fayme looks like an explorer of the frozen north as she gets bundled up to go to bed.
We’re being met with some different challenges since moving out here. Not long after we moved in there were some high winds coming off the mountains behind us. After securing everything in the yard we thought we’d be ok. After a little while we discovered that things we thought secured or too heavy to be affected by the wind were actually blowing around and fetching up against the fence. While collecting those items I happened to glance up at the roof of the house and saw that a section of roofing material had peeled back from the wind. This is heavy composite roof material and it had been well nailed, I’ll let your imagination run on how heavy the wind was. Anyway, I don’t have a ladder high enough to get to the roof so I backed the truck up to the house and stood a kitchen step stool on the tailgate to reach high enough to fold the torn material back to its rightful place and I put a couple un-split firewood logs on it to hold it down. Done deal, right? Well, ten minutes later I heard those logs being rolled around on the roof by the wind gusts. This time when I backed the truck up and climbed on the stepstool I put enough firewood logs on the ripped section that I was concerned about having enough left to heat the house.
The roof is all fixed now and I don’t think this will happen again but I can tell you that this was certainly unexpected.
We still have boxes everywhere as we unpack and try to find a home for all this stuff we have accumulated over time. I can see that the local charities will have some donations from us and we’ll also be having a yard sale or three. eBay and the local Craig’s List may also have a few listings placed.
But the good news is we are here, we survived the move, and I’m ready to get back to making great arrows!
The Greenman Archery website has my new contact phone number if anyone would like to chat about arrows. I can also be emailed through the address there or you can simply use greenmanarrows@gmail.com to catch me. Our internet connection is dial-up now so if you try to call and get a busy signal, my apologies, either Fayme or I are probably on-line waiting impatiently for a page to load. 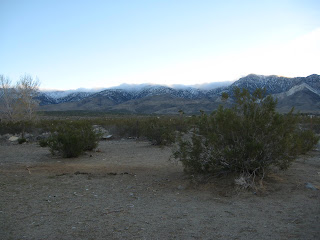 The view from our backyard. Is this place beautiful or what?
Thanks for reading and happy archery!
After this experience I recommend you never move. But if you do, Home Depot has good prices on moving boxes.
Posted by Greenman Archery at 8:46 PM 4 comments: