So, close upon the heels of yesterday's post regarding the little scorpion that stung my foot the other night...

Jim and Carol, a wonderful couple, are bringing me their old bed frame and such tomorrow. They got a new bed and asked me if I could use the old frame and headboard. Yup, I sure can.
Today I was cleaning some things in the bedroom so we'd be able to get in there easily to work on the bed. I still have some bags of clothes my mother gave me from her recently passed husband that I haven't had a chance to go through yet and they were piled at the foot of the bed. I stacked the bags in the closet and got a few other things that were at the foot of the bed. I turned back to the area and just about had a fit. There, sitting on the carpet nonchalantly, was a very large scorpion. I called Fayme so she could see it too and went into the kitchen for something to put over it. A plastic tub served to trap him and he never moved until I slipped a piece of card stock under the container so I could lift it up with the scorpion inside. Fayme brought me a large glass jar and we transfered him into that. 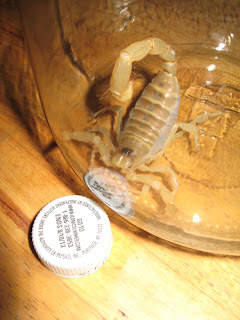 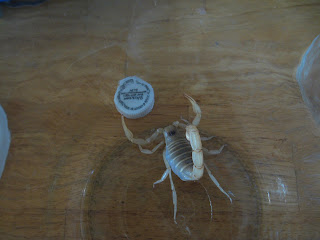 I have to say that I am not at all happy about this one.
That first little scorpion was kind of cute but this one is a whole lot larger and it was in my bedroom. No, I am not at all pleased.
We'll be getting a blacklight in the next couple of days and we'll be checking closely for more of these buggers. Scorpions fluoresce under a blacklight so it should be easy to see any when the light hits them.
So it's rarely boring out here... but sometimes it does get a little too exciting. ﻿
Posted by Greenman Archery at 6:43 PM 1 comment:

It's been interesting out here in our new home.
As I like to tell people, there may not be a lot to do but it's rarely boring.

A pretty good thunderstorm came through last week. We were returning home from the store and were getting a few drops of rain as we got closer to home. The rain got heavier as we drove up the hill from the highway and by the time we were within a mile of home it was coming down like wild. Thunder and lightning, too. One bolt we saw while we were still a ways from home looked like it may have landed right in our front yard. I got soaked getting the gate open to drive in.

Later in the afternoon, after the rain had stopped, I went outside and glanced toward the mountains behind us. Imagine my surprise when I saw a small brushfire on the side of the mountain!
There was already a helicopter surveying the fire and a short while later it was replaced by a CalFire forward air control plane. Not long after that a couple fire retardant planes came in and made drops
to encircle the fire with retardant. Those pilots were incredible. They came into the drop from the peak of the mountain ridge and followed the ground profile downhill to the fire where they dropped
the retardant and pulled out of the dive. It was amazing to watch.
The retardant slowed the fire's progress and the day's rain and high humidity also helped. We could see the fire all night but it didn't get much larger. The next day two ground crews hiked into the site and spent the day putting out hot spots and marking areas for a water dropping helicopter that worked with them.
The incident web page said there were about twenty lightning strike fires in the area. Most were very small. Some were just one dead tree. We've got more thunderstorms forecast this week but so far they
haven't showed up. 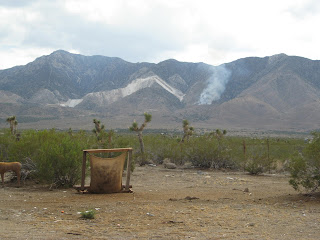 A couple nights ago I took a quick shower before bed. As I was walking to the bedroom I had a horrible sudden sharp pain on the outside of my left foot. I felt my foot for broken glass or something similar but didn't find any. On Fayme's advice I got a flashlight and looked closely at the floor. Sure enough, scorpion. First one we've seen.
Little bastard got me in the foot.
I caught him and put him in a jar in case he needs to be identified if I started convulsing or foaming at the mouth or something equally worrisome. I felt fine after icing the sting site and went to bed. By the following morning I couldn't even tell where it got me.
Apparently I'll survive the experience. The scorpion is still in the jar and I think he'll be less likely to survive.

Too true. After an initial quick look on the internet to see scorpion sting symptoms and first aid I was fine. There is a very dangerous one in California but he's over by the Colorado River. The rest appear to be simply painful. 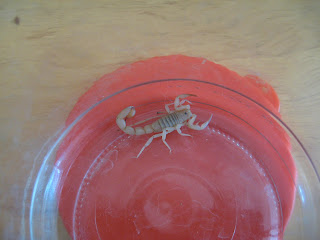 Happy archery, and watch where you put your feet!
Posted by Greenman Archery at 5:30 PM No comments: