Sinew, It's Not Just For Soup!

One of the regular guys on PaleoPlanet recently started a thread in the Trade Blanket section asking about sinew. I kept an eye on the responses because I was also interested in some.
Cesar, one of the site's frequent contributors and the owner of Legionnaire Archery, responded with information about sinew he had available. I messaged Cesar and ended up purchasing a few pieces.

Shipping was pretty quick and the cats sniffed the package thoroughly before I had a chance to open it up. It's probably a good thing we don't have a dog or the sinew would have been chewed up before I knew what was happening!
I took the sinew out to the back patio to see how it would process out. Rather than the deer sinew most places have Cesar sells cow sinew. The information I had from other sources was that cow sinew would work just fine for backing a bow or for my intended purpose, making primitive-style arrows; the price is certainly reasonable. I only did one piece and only did that one part way, but I think this stuff is going to work just fine.

Here is what I started with... 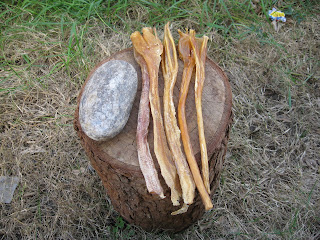 And after a few minutes of beating it with a rock, here's what I ended up with... 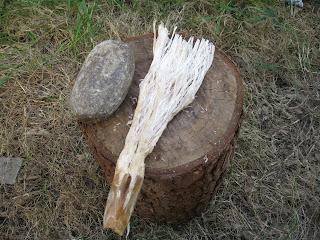 A little more work and I'll have some really nice threads to seperate.
Coupled with the turkey feathers I recently got, some knapped points or trade points, and some shoot shafts, I think this stuff is going to work just fine.
In fact, I've recently been captivated with short, sinew backed bows such as were used by Native Americans here on the US west coast. If you know me then you know I'm woefully slow on making bows but I suspect that when I get around to trying a short bow, this sinew will be perfect for the back. I'm sure I'll be getting some more from Cesar for that project.

Happy Archery!
Posted by Guy Taylor at 7:12 PM No comments: