First of all, my most profound thanks to everyone who participated in this arrow raffle.
We had local SCA folks who knew Njall from back when he and Allesaundra lived here, there were SCA folk from out of state, and non-SCA participants both local and not so local.
In all, thirty three people entered into this raffle. Some people got one entry and some got more. A couple people made very generous contributions and then told me that they just wanted to help, they did not want to be part of the actual drawing.
Seeing as how a large portion of the event was for the Queen, I asked Her Majesty Cassandra if she would draw the ticket.
The winner of the arrow raffle was Lady Cecelia Medici, who was present to hear her name called out.

Again, thank you to everyone who participated in the raffle. My expectations were far outstripped.

Happy archery!
Posted by Guy Taylor at 10:53 PM No comments:

Time is Running Out!

The arrow raffle I am running will be ending soon. I will make the drawing on February 26th at the SCA event, Queen’sChampion Archery & Thrown Weapons & Barony of The Angels’ Robin HoodTourney (Phew! That’s a mouthful!).

Take a look at this blog entry from a short while ago for full details:
Arrow Raffle for a Worthy Cause

At this date, if you want to enter the raffle but haven’t yet, the best way to enter is to see me at the aforementioned event. If that is not possible, I think PayPal would be the way to go so there are no unfortunate surprises with slow mail keeping checks or money orders from arriving in time.
Contact me at guy.taylor@sbcglobal.net for details. 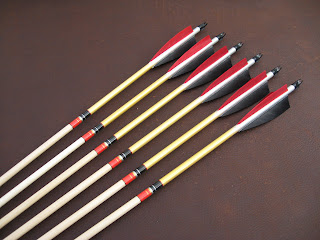 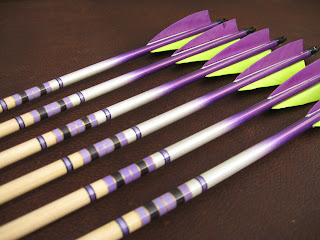 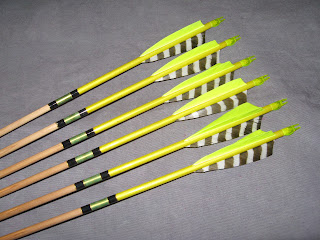 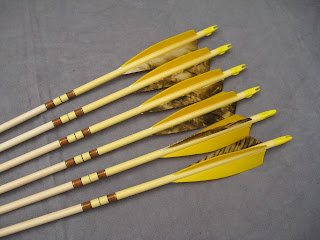 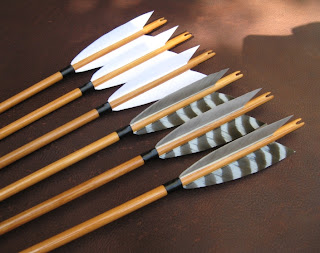 Happy archery!
Posted by Guy Taylor at 2:33 PM No comments:

Festival of the Rose Surprise

I got a surprise at last Saturday’s SCA event.
The event was called Festival of the Rose and Olde-Tymer’s Tourney.
The Festival of the Rose part is where artists in various mediums put forth their best works to celebrate the glory of the Queen and vie for the honor of representing Her as Queen’s Champion for Arts and Science.
I have never entered for Queen’s Champion for Arts and Science. You know from seeing my past work that I love to make beautiful things but I’ve rarely sought specific recognition for my work… other than to have people pay me for it!

I got to the event last Saturday with no intention of doing anything other than work on a bow and make a couple bowstrings for folks. I also had some arrows to deliver for Cristof and was pretty sure he’d be there.
Sitting there in the morning trying to figure out if I should start work on the bow or eat some peanuts I suddenly remembered that I hadn’t yet gotten pictures of Cristof’s new arrows.
I rolled out a straw mat we’d brought along and captured a few pictures before Cristof showed up to take his new arrows. He loved the way they looked and I thought that was the end of it.

Later, towards the end of the day, Fayme came to drag me into the room where all the entries for the Queen’s Champion Arts and Science were being displayed. I was just getting ready to break down our gear in an effort to stay ahead of some dark clouds threatening rain and didn’t want to go. She told me I had to go.
Imagine my surprise when I saw Cristof’s arrows on one of the tables! That rascal had entered them under my name into the Queen’s Champion contest. Next to the arrows was a small pile of various tokens placed there by people who liked what they saw. There was even a big chocolate rose from the Queen Herself.

I didn’t win but it was very gratifying to see the appreciation for my work, especially considering all the other beautiful work being shown. 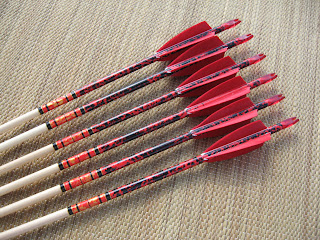 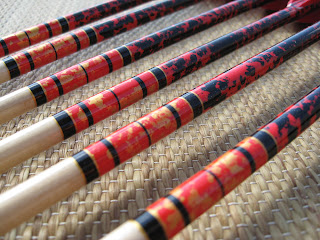 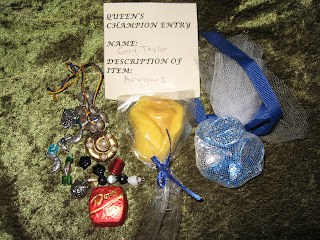 Happy archery, and Long Live the Queen!
Posted by Guy Taylor at 1:16 AM 1 comment:

For some time I've been thinking of a particular pattern for some cresting. I found the specifics for size and such on Wikipedia. At the same time I found pictures on the internet to use for a basis on the crown of one of the sets. After practicing the crown on a few dowel scraps I figured I was finally ready. 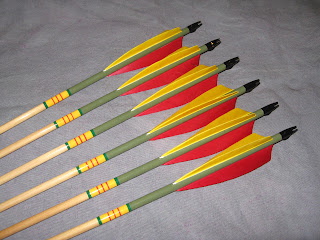 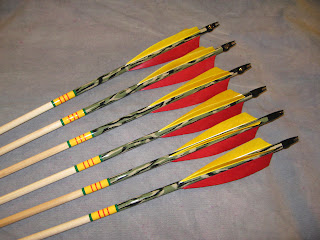 Here are detail shots of the cresting... 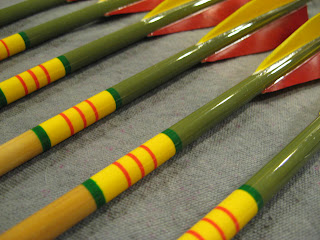 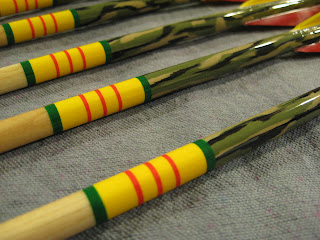 For those folks who don't recognize the crest pattern, it's the Vietnam Service Medal ribbon. The medal was given to armed service members who served in the Vietnam theater during the Vietnam War.
I never went but quite a few of the folks I call friend did go. I wanted to do something to recognize those who served there and this is what I came up with.
The camouflage crown on the second set is meant to portray the iconic tiger stripe camouflage that some units used in Vietnam. It was never an officially issued uniform but it has come to be associated with the time and place. I didn't capture it exactly, but for hand painting it I don't think it came out too badly.
The red and yellow fletching echoes the colors of the crest. I thought about doing a barred cock feather but decided to keep it plain so the visual focus would be on the cresting, where it should be for these arrows.
I'll have these arrows for sale on the Greenman Archery website soon. If you're interested in them before I get them over to the site just leave me a message here. I'll also have these or similar arrows available at the Chamberlin Ranch traditional 3D shoot in April.
Happy Archery... and, thanks for your service.
Posted by Guy Taylor at 1:31 AM 5 comments: