This may seem as if it would be a better post for Greenman Cooking. But despite the title, it's not really about cooking, as you'll see...

We all go through changes in our lives for what we do for recreation.

Activities that we are passionate about today may get put back into the closet as our lives progress and change.

For example, I used to do a lot of fishing. When I was in high school I worked in a fishing tackle and bait store on the Huntington Beach, CA pier. I spent a lot of hours out on that pier fishing with friends and also fished at other local spots as opportunities presented themselves. I even began wrapping my own fishing rods, an activity that I kept up on for many years. 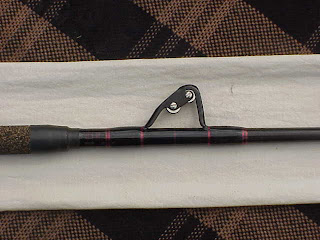 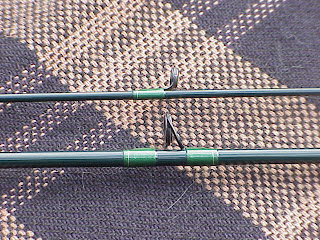 Pictured are a stand-up rod for ocean fishing and a fly rod for lakes and streams. I made both of these.

Back when I was married my wife and I used to head down to a quiet spot in Newport Harbor to fish on some evenings. Along the Balboa Peninsula there are some little beaches that are quiet and offer an opportunity for a relaxing evening along with the chance to catch some really nice fish.
I’ve caught some beautiful spotfin croaker in the particular spot we went to and have just generally enjoyed the time spent there.

We decided one day that we’d go down to the spot for an evening’s worth of fishing so I called a local tackle shop to see if they had a particular live bait that I liked to use. They did so we drove down to pick up a container of live ghost shrimp.

Arriving at the tackle shop we walked in just after two women and a man. They were probably in their early twenties and were gathering firewood and snacks for an evening at the beach. I told the fellow behind the counter that I’d called about the ghost shrimp and he got a carton of them out of the refrigerator for me.
I opened up the container to see the size of the shrimp and make sure that they were all alive and in good condition. One of the young women happened to be standing nearby and she curiously peered into the carton to see what was in it. Upon seeing them she asked, “What are those?”
“These are ghost shrimp,” I said.
“What do you use them for?”
Now that was a dangerous question to ask me but I still don’t know what made me give her the reply I did:
“Stir fry.”

Upon her exclamation of surprise I proceeded to explain that you can’t find these shrimp in the regular grocery store, you needed to get them from a reputable tackle shop like this one. That was the only way you’d be assured that they were fresh and tasty.

At this point I glanced up at the fellow behind the counter and saw that he was trying to eat his fist to keep from laughing uncontrollably.

The young woman had now taken the carton of shrimp from my hand and was poking them with her finger while the other woman looked on. I told her to be careful as the shrimp do have pincers that are large enough to give a little surprise.

The guy eating his fist had finally recovered enough to ask her to give me back the shrimp so I could buy them and get back to making dinner. She did so and he rang up my sale.

Walking across the parking lot to my truck my wife said, “You know, you can go to hell for things like that."

Possibly, but it’ll sure be a fun ride along the way.

Posted by Guy Taylor at 1:08 AM No comments: