And Now For the Real Pictures!

Thanks for your patience, everyone!
Now I can finally give you the actual pictures of the special arrows I recently made.

First, a little background:
Back on April 30 I attended the SCA event, Robin Hood Archery, Rapier, and Thrown Weapons Tournament at the Woodley Park archery range. Prior to the event I was approached by Maestra Flavia Beatrice Carmigniani, the Baroness of the Angels, about having something special for the event. For a less than usual cost I agreed to make a set of custom arrows for the winner of the event.

On the day of the event the winner was THL James Everglad, a very accomplished archer. When I approached him to see how he wanted his arrows made James very graciously told me that he has enough arrows already. Rather than make another set for him he asked me to make them for the Baron of the Angels, Master John ap Griffin. The Baron was just getting started on his own archery path and could use some good equipment. I asked James if I could try something special that I’d been thinking about and he gave me free rein to make the arrows as I wished.
Almost at the same time, Lady Rayne the Archer of Anan ordered another set of arrows for the Baron. She wanted these to be less decorative so the Baron could have a “practice” set and wouldn’t have to worry so much about losing or breaking arrows from the “special” set.

As I mentioned in my previous post there were some hiccups along the path for these arrows. I had to order some special materials and then had computer printer issues that needed to be resolved. I tried to get a special use printer that I have up and running and for various reasons that entailed finding a used laptop to run the printer. That ended up not working out yet but eventually all the various parts came into line and the arrows got built. In the following pictures you’ll be able to easily distinguish between the two sets of arrows… 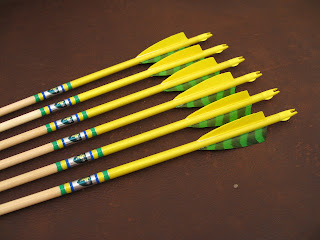 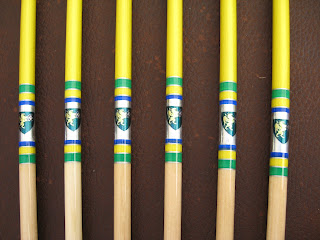 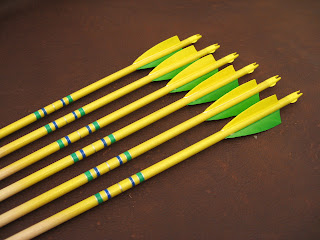 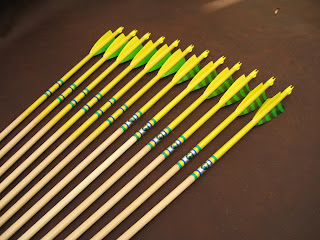 Details:
I used silver leaf on the special cresting to give a touch of flash and make a good background for the Baron’s personal device, which I shamelessly stole from the baronial webpage. The small size of the device shows some pixilation of the art but you have to look closely to see it.
The yellow crown on the arrows is an iridescent airbrush paint and the cresting is craft acrylic paint.
My judgment on these is somewhat biased but I think they came out pretty damned good.

Both sets of arrows were presented to the Baron at the Barony of the Angels 41st. Anniversary event on September 10. To my great regret I was unable to attend due to a prior commitment for the day. If anyone has pictures of the Baron getting his arrows I’d love to include them here.

Thanks for your patience in waiting for the good pictures.

And Now… For Something Really Cool…

A while ago I was commissioned to make some special arrows for someone. In fact, two different people placed different commissions for the same person to receive new arrows. The two sets would be similar, but different, kind of a full fancy dress set and a Friday casual set.

I had something different in mind that I wanted to try for the fancy set and once I got the go-ahead I began gathering things together. There were some unexpected bumps in the road: a printer that stopped behaving, an effort to get an old printer working again, a new/used laptop for the old printer to connect to… it’s been interesting.

Finally, everything came together and I got started on the arrows. I think they came out really well. This is a treatment that I will be making available on other custom orders. It will cost more, unfortunately. I do have to make a living and pay my bills. But it's pretty dang unique and could be just the ticket when someone wants the ultimate in special arrows. 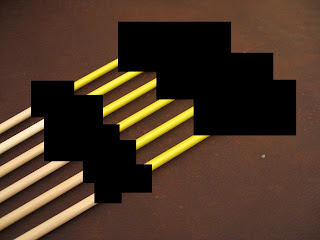 Yeah, I know. I’m a jerk. I got you all worked up and ready to see these great new arrows and I’ve got the picture edited so you can’t see them.

The problem is, I'm really excited about these but the recipient of these arrows hasn’t gotten them yet and doesn't know anything about them. I don’t know if that person reads this blog or not and I don’t want to take the chance that the surprise will be blown. Give it a few days and I should be able to put up the real pictures. It’ll be worth a trip back to the blog to see them, they really do look great.

Happy archery!
Posted by Guy Taylor at 12:20 AM No comments: