Wow, almost a year has passed since my last blog post. So much has happened in these months... where do I start?

Arrow making wasn't making me enough money to live on so I had to find a real job. I was lucky that a southern California-based hunting and fishing store was expanding to my area with a new store a couple towns over. I applied and was accepted for a sales position in the new store. I had a couple months of long commutes to train at an existing store before the new one opened up in February. We've been doing quite well at the new store and I enjoy working there. Most of the people I work with are younger than I but we all get along well and work together as a good team. Who knew that all the time I spent fishing, hunting, and shooting would someday help me earn a living?

Working at this new job severely cut into the time I had available to make arrows. After trying my best to finish four orders that were in the works when I was hired I finally had to refund everyone's purchase price and admit that I just couldn't do it. Consequently I had to put a hold on my little arrow making business. That was a pretty difficult decision for me. I really enjoy arrow making and frankly, I'm pretty good at it. I haven't given up completely on arrow making yet, but for the time being I have to put it aside.

My mother passed away in April. It was very unexpected. Her husband had died in 2013 and she seemed to have lost some of her vitality with his passing. Dick had been feeling the effects of Alzheimer's and caring for him really kept my mom going day to day. With him gone she suddenly had time to herself, but lacked the will to do much with it.
We would typically speak on the phone at least once a day. Mom had an amazing ability to call during my dinner. It didn't seem to matter if I ate early or late, she managed to call at just the right time. When I hadn't heard from her in a couple days and she didn't return my calls I got in touch with the office at the mobile home park where she lived to have them check on her. They couldn't raise her so the sheriff and paramedics were called to make an entry into her mobile home. I got the news I pretty much expected to get.
It took us about a month and a half total to get her home cleared out and sold. My work was very understanding and gave me whatever time I needed while keeping my position available for me. I can't thank them enough for their support.
We finally had Mom's ashes buried next to her husband's a little over a week ago from this writing. I think I waited so long because I just didn't want to let her go.

I'd inherited Mom's car after she passed away. It's much nicer than my truck so we drove the car to the service. We arrived the day before and got a hotel room so I wouldn't have to worry about getting there in time on the day of her service. As we drove away from lunch at Carl's Jr. a guy in a Hummer ran a stop sign and ruined the driver's side rear door of our car. In a very strange turn of events he ended up buying the car the next day and Fayme's daughter gave us a ride back home. I guess it is somewhat appropriate that the day we say goodbye to my mother we also say goodbye to her car.
What a very strange weekend that was. If it's alright with you I'd rather not repeat it.

I mentioned that I'm not making arrows right now but I am still keeping my hand at part of that activity. A fellow here in southern California shoots English war bows, classic yew longbows of about 80# and higher, and has begun to gather others about him who have the same interests in these beautiful, powerful bows. Heath begged me to make some shafts for him and his group and I couldn't pass up the opportunity because what they're doing is just so cool.
I start with 1/2" poplar dowels that are very carefully chosen for good grain and other desirable characteristics. Using a small hand plane I reduce one end of the shafts to 3/8". A slot is cut to insert a slab of horn to reinforce the nock and another slot is cut to make the nock for the bowstring.
There you go: a proper English warbow shaft. 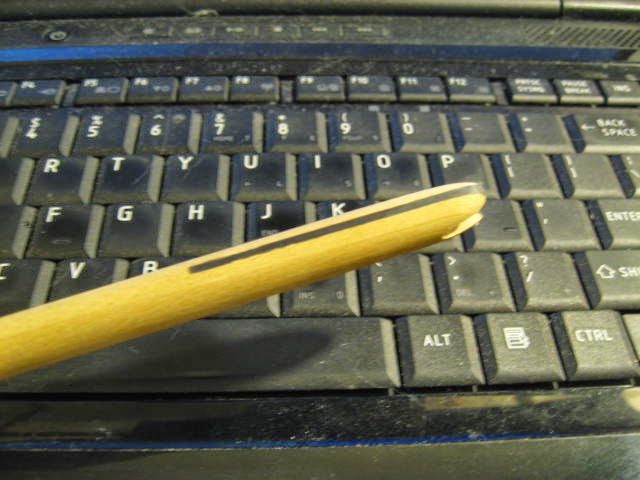 Actually, it takes me quite a bit of time to do it all right and make it beautiful. The above is a very basic description of the process and ignores some steps as well as a whole lot of handwork. Luckily, Heath is doing the actual arrow making with fletching, tying on the feathers, and fitting the arrow heads. If I had to do more than just make the shafts with nocks I wouldn't be able to do it. 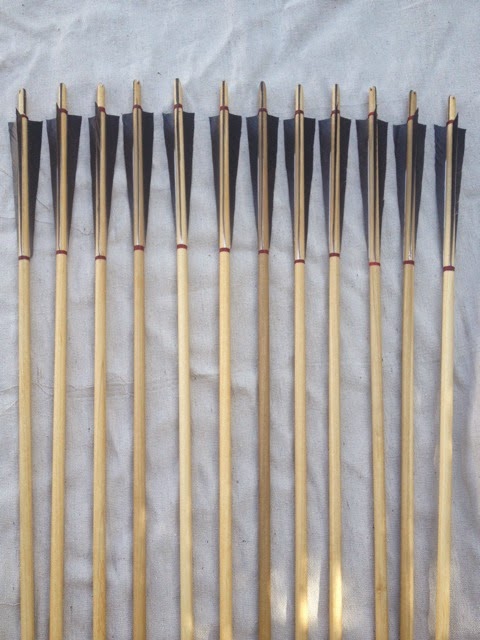 We got six new chickens a few months ago. Good friends Jim and Carol had raised four chickens for us and brought them out when they were big enough. Tragically, a stray dog got into the yard, broke into the chicken coop, and killed all four just a couple days after we got them. I came very close to shooting a dog that day.
We got the six new chickens from the local feed store. We moved the chicken pen closer to the house and reinforced it to avoid future break-ins.
Our chickens are finally old enough that we've begun to get a few eggs from them. Finding that first egg was pretty exciting. We'd gotten to the point where I was just about to have a very stern discussion with the chickens about what we expected of them when the eggs began to show up. Conflict avoided. 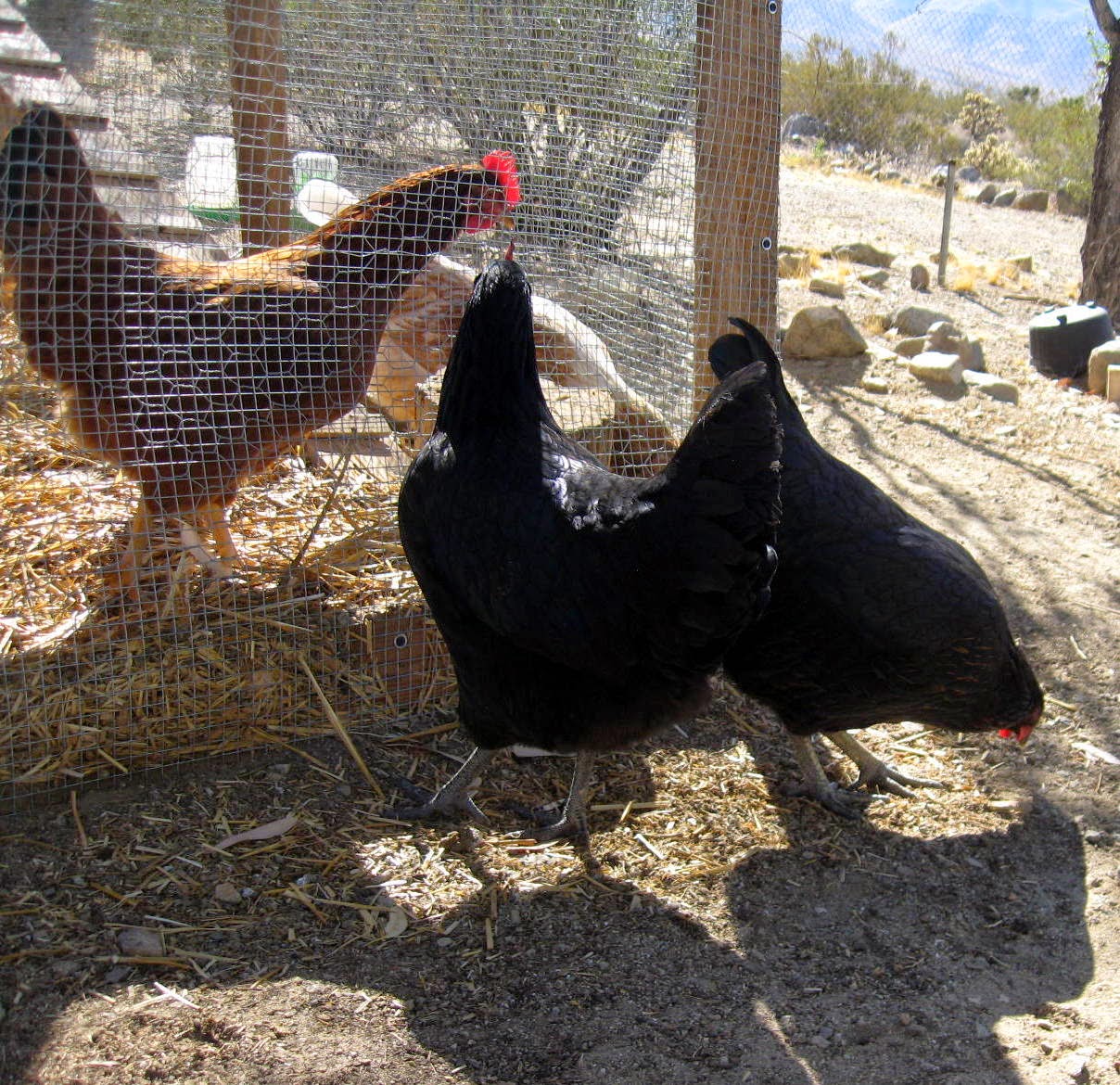 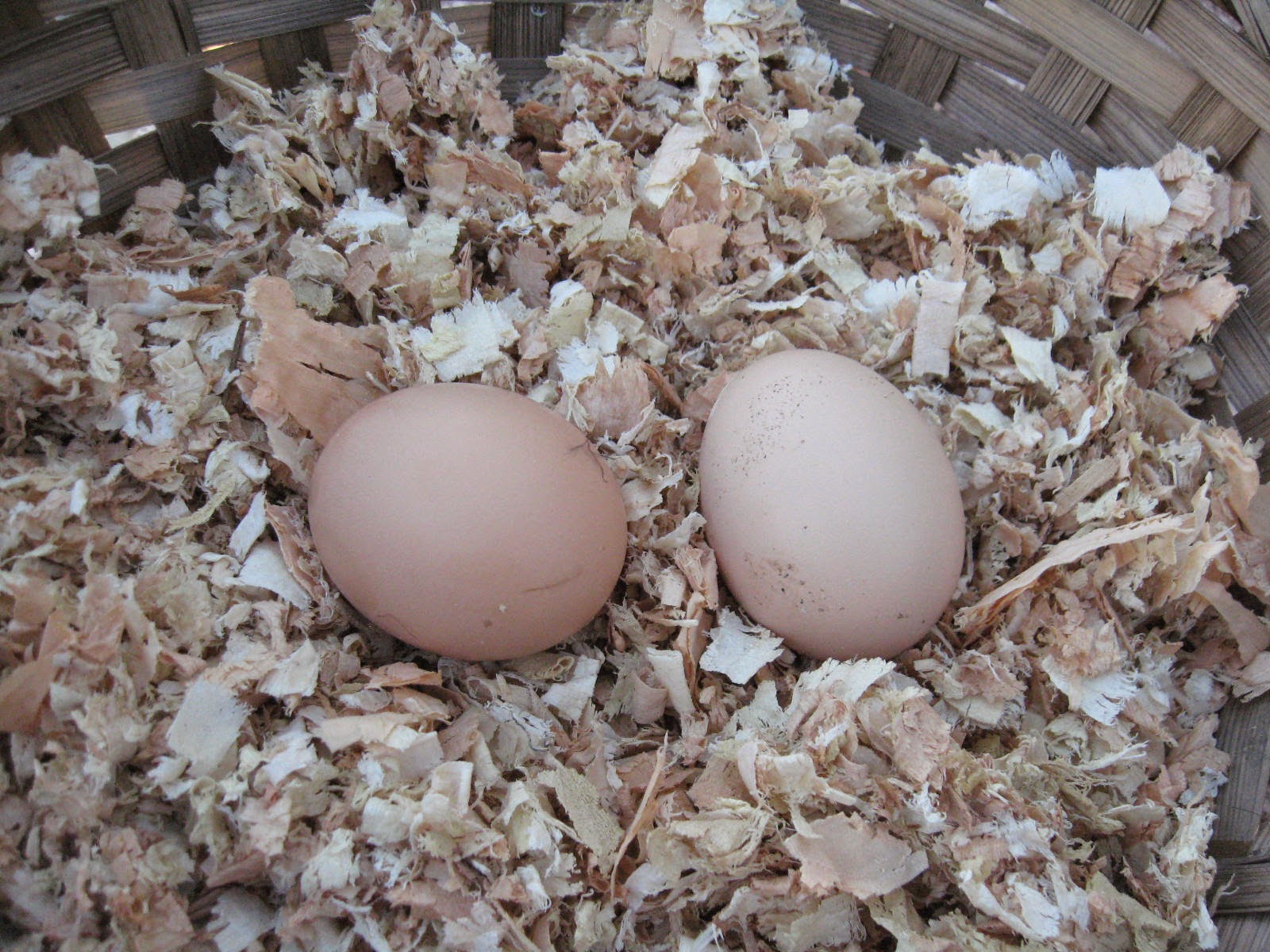 It's surprisingly calming and interesting to sit and watch the chickens putter around and interact with one another. I found Rainbow Mealworms in Compton, CA that sells live mealworms and the chickens go absolutely nuts over them. One shipment was dropped off at our mailbox in the heat of the summer and all the mealworms were dead by the time I came home and found the box. Apparently our contract mail delivery person doesn't know what a big fluorescent green lable reading LIVE ANIMALS on the side of the box means. In order to avoid this Rainbow now sends the package to the local post office and I pick them up there, my address isn't even on the box lest mr. delivery dufus should try to deliver it.
Perhaps I should mention that I have the highest respect for USPS mail carriers. Our mail is delivered by a contract employee, not USPS themselves, and I have a somewhat different opinion of him.

I'd intended to apply for a javelina tag for Arizona's January archery-only hunt. With everything going on with Mom's service and all I forgot and missed the application deadline. After the tags are drawn I'll see what's available in leftover tags. If anything looks good I'll see about getting one of those.
Even if I don't get a javelina tag we intend to go to Arizona somewhere around the new year to visit the Quartzsite flea markets. Right around January each year the town of Quartzsite, AZ hosts a number of flea markets and rock and gem shows. Most are held in the open air and I can tell you that they are one heck of a good time. I love wandering about to see what folks have for sale.
While visiting Quartzsite a few years ago I got a couple old roofing hatchets that David Brunetta, artist, knife maker, and red-hot-metal smith extraordinaire, remade into bowmaking hatchets for me.
I think it was the same year that I got a couple hundred pounds of obsidian at a very good price for knapping practice. I hope I can find more of that. My knapping skills are still very much in the beginning stages and I won't get better without breaking a lot more rock.

Ok, if I keep writing this thing is never going to get published.
Suffice to say that I'm still around but life has given me a few changes to work with. I'll see what I can do to keep the blog updated a little more regularly than once a year.


As always... Happy Archery and Thanks for Reading!
Posted by Greenman Archery at 12:40 AM

Good to hear from you, Guy. All the best!
gb

super cool, iI know that this page also has an amazing blog about archery